The St. Christopher and Nevis Social Security Board is continuing its dynamic contribution to housing on St. Kitts. The most recent efforts are in support of the Federal Government’s project launch of its ‘Unity Housing Solution Programme’ in relation to the provision of affordable houses to qualifying recipients. The signing of a loan agreement for funding to the tune of EC$50 Million took place during a public ceremony at Wellington Road in Basseterre on Friday 17th February 2017. The event was organized by the NHC in collaboration with its parent Ministry of Human Settlement.

The loan was negotiated to be repaid over a period of 25 years at an interest rate of 3 percent per annum. The funds will be drawn down in tranches over a period of three years in keeping with the progress of the project which was being launched at this time. Three hundred (300) units will be constructed under the government’s  low income affordable housing policy. An additional important condition is the projected engagement of local contractors. This is intended to stimulate and support indigenous entrepreneurship.

This most recent public exercise comes closely on the heels of a similar event on 24thJanuary 2017 on the island of Nevis when a loan agreement for $10 million was concretized in favour of the Nevis Housing and Land Development Corporation for housing. Both initiatives are a demonstration of Social Security’s continuing commitment to supporting national developmental projects under the auspices of the Federal and Nevis Island governments. 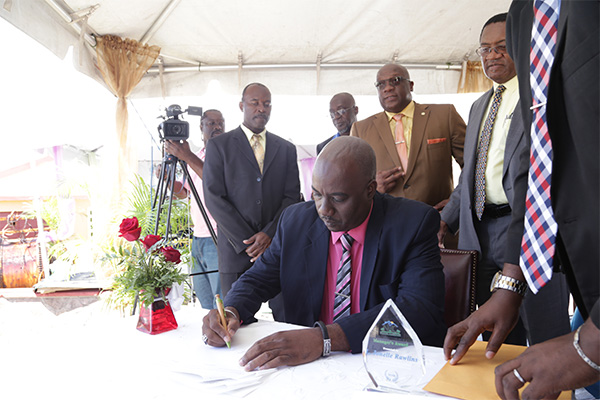 Stock Photo A recent outbreak of the deadly coronavirus on S...

In keeping with the recently announced restrictions on movem...